The Professor Will Be Away... Again + Google

It seems I am not a master of my own destiny these days. So I shall be away from home base for over a month.

During this time I will not be able to post on this blog as often as I like. So my apologies dear readers.

Of late I am starting to think that Google has become a passionate force for not so good. I used to admire them a lot more than I do now.

I have also learned to my cost that form dominates function. Making a change on my blog image resulted in Google's spider dropping me and also their new functions have started to bypass sites such as my blog. Apparently I was not alone - but while others have picked back up - I am languishing and falling behind.

Ryanair - The First Airline Ever To Publicize An Outage

Well you have to hand it to the boys and girls in Dublin. Calling a spade a spade has never been a problem

So announcing that they will shut the site down on June 24th is a bold but actually pretty fair move.

It is one of the only times I can remember when an airline says it will shut down its site and sets the expectations for how it will handle itself in the process.

I find this very refreshing

The recent spat over commissions in the vast North of Canada has the Travel Agents - well somewhat in vogue again.

I wont bore with details about the Air Canada and Westjet raise/lower/raise commissions only to make the point that the spat proves that in today's buyer's market the agents are actually very important.

Why? Well if your yield is in the toilet (as it is) it has become an issue of economics for the supply side. Thus the minimal amount that the agents represent in cost compared to the loss of yield actually makes the agents seem like a good deal. For the neighbor to the south, the revenue is off by nearly 30% on only a 6% reduction in passenger numbers (ARC figures for May). That clearly shows that any way to mitigate this drop is good.

What have we seen publicly? Delta introduced 10% on certain routes in the NY market. AC and Westjet settled on 7%. etc etc. So compared to the 10-15% drop in yield for the airlines these commission numbers look actually attractive.

Does this signify that there is a lot of cash awash in the market? Actually when you look behind the numbers we see that the GDSs are still getting wads of cash from the Airlines in GDS transaction costs/fees, commissions are actually rising, the amount of money the publicly traded intermediaries are getting seems to be going north not south. And of course the deals out there for consumers are unheard of.

The airlines are in turmoil and despite the words of wisdom coming from Chairman Willie, we are seeing an about face by the supply side who just 12 months ago still spurned the Agency channel.

So as the pendulum has swung more - let's just take a moment to reflect that there is an opportunity for new found cooperation by the Travel Distribution System as long as people don't get too greedy. That means that the airlines and the user community must continue to look where the costs are and vigorously pursue rooting them out and making the channel(s) more and more efficient. Woe betide anyone who thinks this state of affairs is permanent and they can sit back and sing "Happy Days Are Here Again". Anyone who enables cost reduction in a win win for the suppliers and sellers should be embraced.

But ultimately - this too shall pass. So remember on whose head you trod on the way up. They might just kick you on the way down. As the Emperor Augustus said - Festina Lente - hasten slowly.

6% might not seem like a lot but for the first 5 months of 2009 this is not good news. Worse is that the losses are not abating. May's numbers shows pax were off nearly 13%. Cathy must be suffering badly as the majority of these are going to be business travelers cutting back.

Even the airport is predicting more bad news for June

With China in the doldrums and Swine flu further compounding matters, the recovery will not necessarily be arriving any time soon. Finally the impact of the loss of the trans-shipment (flight from Taiwan can now go direct) Cathay's poisition is looking pretty awful at the moment.

Freight continues to collapse which is the worrying thing for everyone.

Yields are going to stay low for a long while yet.

The death reported today of the first H1N1 patient in the UK should not be cause for undue alarm. Coming 3 days after the official declaration of pandemic by WHO - the number of cases have risen in the UK by another 11% to over 1400. This shows that the disease is a threat and should not be taken lightly.

However I believe we should not panic.

On my recent travels - I have seen quite a few people sporting facemasks and the like. At the same time - people openly sneezing or with other sundry bad habits continue unabated.

Just remember there is one key thing you can do - WASH YOUR HANDS FREQUENTLY - that is a pretty good way to keep the spread of any disease contained.

Speculating On The Ryanair Order 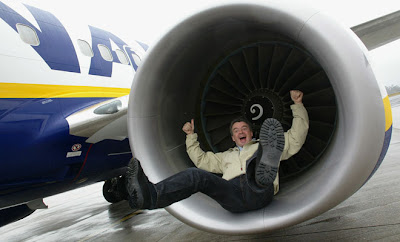 So Ryanair is getting a lot of interest in its potential order for up to 300 Aircraft.

Most people poo poo Michael O'Leary as a crank. He frequently floats ideas just for effect. 1 Pound Toilets anyone?

This time however we think he is in deadly earnest and no one can afford to ignore him.

In a year when the NET airline bookings for both Airbus and Boeing have JUST cracked double figures, these sort of numbers are astronomical and terribly important to the stock of both companies. (EADS and Boeing).

The big question really is the likely outcome. So there are 4 doors:

Behind Door #1 is an all Boeing deal. Conventional money is on this one because its somewhat obvious.
Behind Door #2 is an all Airbus deal. This is the risky profile by JL is the master salesman.
Behind Door #3 is a composite deal. This will be expensive for both parties because both suppliers will have to pay extra to allow it.
Behind Door #4 is the goat. IE a laughing MOL.

I am not making any bets - just yet... except the side bet that THERE WILL BE A PR statement during Paris.

I also have a secret bet on something else. I will share with you if it happens. It has to do with a slightly different proposition.

Dr Addison Schonland runs the very well put together Podcast and Blogs over at IAG. despite the fact that he is a closet Republican - we do enjoy working together having co-authored 2 studies on LCCs.

Over at his blog is the really sad story of the couple who missed AF447.