Delta retreats on the Transatlantic

On my flight from Europe to the USA – I noticed that Delta has announced “seasonal suspensions” of service. These include the following routes

As some analysts have speculated the JV model has its flaws. With high fuel costs eating into Delta’s aging fleet of 767s the airline and its transatlantic JV Partner – AF/KL – are beginning to take a long hard look at the inefficiencies of some of these flights. At a time when the mainland European carriers and United have nice new shiny planes – Delta, American and British Airways have older and less fuel efficient aircraft.

It will be hard to untie this conundrum

According to several sources DL will announce in next few weeks a substantial initial order probably exceeding 100 aircraft of the A320 NEO family. The options will likely be up to 300 aircraft and flexed to include 3 members of the 320 family with 319/320/321 all to be included. The 321 will be used to replace the aging 757 fleet and is the most urgent of the aircraft replacements required by Delta. The A319 NEO will be used to replace the MD88 fleet. With 737-800s and -700s still being delivered and MD90s still entering the fleet – the need for smaller sized aircraft is not as pressing.

The door still remains open for a smaller C-Series, Superjet or MJX type aircraft as Delta right sizes its fleet and retires the older 50 seater RJs. So Delta has left the door open for a really killer deal by Bombardier should the Canadians come up with something. The other players should be considered as extreme dark horses. The prevarication by Boeing on its 737 replacement aircraft and the conflicting model sizes have not helped its cause with Delta. With the debacle over the 787 program and its myriad of delays including not least the issues of missing performance metrics of the early model deliveries – Delta doesn’t want to back such an “iffy” in its need to replace its 757 and MD88 fleets. With the economies of scale not likely to kick in for a brand new Boeing aircraft – the decision for Delta has become clearer.

The signals from Chicago/Seattle are that don’t expect a decision on the 737R any time around the Paris Air Show. Delta needs to be assured that the stream of aircraft can arrive at a reliable rate from its supplier. For Airbus with now 3 production line locations open – this is more reliable than Boeing who has not even selected the location for the 737R first line. For a 2016 delivery and for multiple years beyond that – Airbus has the ability to commit and guarantee. On the other hand Boeing has not shown itself to be reliable as a supplier in its next gen aircraft.

Perhaps this is a wake up call. Boeing might about now be thinking that Chicago might not be the centre of the universe.

USA - This Is Your Official Warning

The reverse brain drain has started

More than half of a survey of 1000 Indian residents in the USA said they will be going home SOON.

The impact on travel patterns will be significant not just for the families themselves.

For long haul airlines who are currently benefiting from this traffic - you had better pay attention.

You have been officially warned

This week I flew on Air Asia X. It was an interesting experience. The flight was from KL to Mumbai. The price was right for the nearly 6 hour flight. Although for a longer haul flight I would not really have been as willing to consider the differential in pricing as the only factor.

Long Haul low cost is a delicate beast. Air Asia seems to be making a good go of it. Watching the various flights leave on an average morning the A330s and A340s head out along with the myriad of the A320s in the sister companies.

Clearly this has Singapore worried. SQ faces threats on many fronts. While its profits continue to be stellar the loss of share particularly to the GCC based carriers must be hurting. Its shared investment in fellow Temasek company Tiger must be a cause for some merriment. Long term however the challenges facing SQ are significant enough that the company must do something.

So here is the first (of possibly many) salvo, from UK's Flight Global.

Just don't expect to see many A380s packing them in...

"GDS Also Vigorously Compete" but do they do this fairly?

The team at Travelport have hit back at the American Airlines lawsuit and as expected have asked for a summary dismissal of the action.

A good summary can be read in a wide variety of media. They tend to be biased based on the viewpoint of the media organ involved. So I am not going to do a link to any of them.

In the US Travel Weekly article there is a good quote that ends their piece:

Let me translate that for the non-lawyers and non-spinmeisters in the audience.

Fact: GDSs will do anything possible to protect their $9 Billion annual revenue business.

But what the last sentence means is anyone's guess.

Sadly in my view - Travelport still thinks its just about the money. The argument doesn't make much sense however when you see the extent to which they have gone to obfuscate the underlying issue which is about more than mere cash and negotiation.

Yes... there is a clear issue that the GDS charges too much and passes on that money in an unnatural way to the agents to buy business.

However the lack of technology innovation (and I am talking about REAL innovation not just more lipstick on the old pigs) and the lack of enabling a richer consumer experience is what needs to change.

The controlling mechanisms that the legacy GDSs have placed on the market has only one beneficiary over the long term. Google.

Consumers need and want choice. They need innovation to enable that choice. The GDSs with their cost model and antiquated technology have for too long held the market hostage. Now they are being punished for it in the marketplace and it would seem - also now in the courts.

In particular the venture companies that own the US GDSs need to take a hard look at everything. The GDS cash cow operation model with mediocre and antiquated clunky systems are not sustainable.

LH Exits MXP With Tail Between Its Legs. Puts On Brave Face

Sensing an opportunity to pick up traffic from the then floundering Alitalia - it stationed specific aircraft at the further away from centre Italian airport Malpensa. MXP.

To read the whole story go to Anna.Aero

But I love this quote

"Lufthansa Executive Board member Carsten Spohr, who is responsible for Lufthansa’s passenger business, commented: “We are the most successful foreign airline in Italy and we want to consolidate our position. By shifting capacities from Lufthansa Italia to our core brand Lufthansa and strengthening Air Dolomiti, we will be able to offer our customers an even higher quality network of services via our hubs. The link between ‘Lufthansa’ and ‘Italia’ will remain as close as it has been up to now.” Michael Kraus, CEO and President of Air Dolomiti will be responsible for realigning Lufthansa’s and Air Dolomiti’s presence in the North Italian market."

I think both Ryanair and Easyjet would dispute that claim.

So who will be the winners and losers on this? Frankly I believe that Ryanair and Easyjet are both winners. The number of Italians at Stansted yesterday was amazing. Indeed the place was pretty busy even in the off-peak afternoon hours. And remember that many of the German services were not operating yesterday.

The bad news for agencies continues to come in droves from the US market. While traffic continues to show declines for the agency community the numbers look positive from a revenue perspective. And here is where the data can be misused. 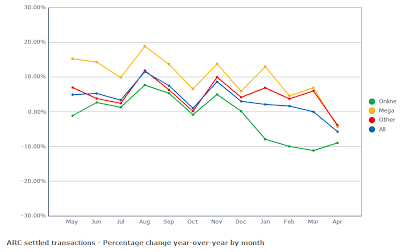 The good news (well a slight bit) shows that the rot has been reversed for the OTA sector for the first time since November 2010 that the increasing percentage of decline has seen a small reversal.

We can easily conclude that the good news is that AA was back with Expedia and Priceline's direct connect was kicking in. However I remain skeptical that this will show any real improvement any time soon.

The very tepid transactions numbers forecast for the summer make this unlikely.

This time the airlines are emboldened by the stunt last year by British Airways then CEO (and former pilot) Willie Walsh taking the controls and flying through the Ash Cloud.

This year Ryanair was first off the mark with MD and non pilot (formally he was a trained accountant) Michael O'Leary leading the flight (from his desk chair) into the Ash Cloud.

Sadly the lessons learned from last year do not seem to have been visited equally on all the stakeholders.

However once again - the Professor will state clearly that discretion and erring on the conservative side is a better way forward.

One here is a thought. You can be sure that when push comes to shove - Ryanair will likely quietly pension off that plane and sell it. So plane spotters try and find the registration and send it over.

Also on a personal note - the Professor is flying in the wee small hours of May 25th from India to UK. Then on the date when the concentrations are predicted to be at their highest - May 27/28 I shall be flying to Germany and then back home to the USA. Why do I think this may be a personal plot!!!!

We could not make it up.

Sanity in a Sea of Madness. Less Regulation Not More

In this post he argues succinctly that in a heavily regulated industry - less regulation will benefit the consumer not more. His argument is one that I believe is appropriate at this point in time when special interest groups such as BTC and ASTA have been trying to push for unwarranted and unnecessary regulations shoe horned into the much needed FAA Re-Authorization bill.

This bill as I have written multiple times before needs to get passed as quickly as possible so that we can get on with the job of improving the air traffic system in the USA. Something that has been needed for a very long time.

So bravo and a tip of the Professor's hat to Chris for speaking out on the subject.